The store will not work correctly in the case when cookies are disabled.

What Your Employees Might Be Up To (Idle Hands Are Dangerous) 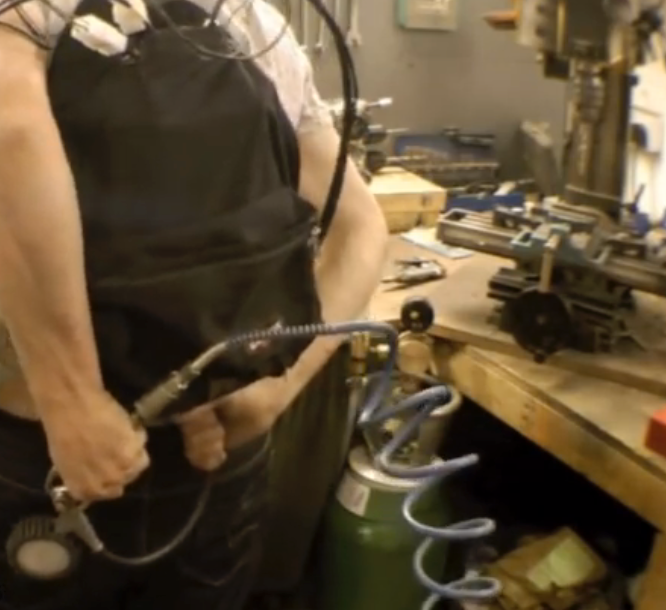 When it comes dreaming up weird and wonderful ways of entertaining ourselves, humans have a great track record.

When the mind wanders and we dedicate ourselves to something wholly silly, there is almost no limit to the insane and inspired ideas we can come up with.

Compressed air, for example, is something most people associate with inflating their tyres or for a spot of intensive cleaning – not many would consider the array of glorious fun on offer from simple compressed air.

As we will see below, however, the human imagination will always transcend the mundane and come up with amazing contraptions and uses for almost anything.

Everyone’s favourite member of the X-Men, Wolverine has a no-nonsense attitude and, of course, those awesome extending claws.

Everyone who has seen the movies or read the comic books has thought, at one time or another, how great it would be to have retractable claws. Aside from the coolness factor, it would make slicing vegetables and keeping the hedges respectable a synch.

Now, someone has taken that dream and turned it into reality.

Colin Furze- clearly a man with a great deal of talent and a Wolverine fixation, came up with the idea one day whilst in his workshop.

Appraising current offerings of electric Wolverine claws, he decided he wanted more. He wanted claws that extended and retracted with the same speed as those in the movies. Setting to work, he soon found the solution in pneumatic power.

Via ingenious use of O-ring seals, Colin managed to, essentially, turn the blades into projectiles held into place by a fixed guide rail. By using a backpack comprising an air tank to supply the necessary pressure, Colin can deploy and retract his claws with lightning speed whenever he needs.

Whilst the air tank and valve bank on the back are a bit heavy, the effect is amazing and as close to Wolverine’s claws as reality can currently get.

The legality of the setup aside, Mr Furze’s rig stands as a testament to his own inventiveness and the terrific power of compressed air!

Thinking back to childhood, nearly everyone can remember toying around with a humble spud gun.

For many, this took the form of a small, brightly coloured pistol-type gun with a potato rammed on the end. The resulting armament would then deliver results, with the potato travelling a few feet. In childhood, though, a spun gun felt like a bazooka.

With the addition of compressed air and some more advanced engineering, the humble potato launcher can truly become a weapon of mass destruction.

Instead of the usual hand-form that small launchers takes, a real pneumatic launcher looks more like something that should be strapped to the deck of Navy cruiser.

A pneumatic launcher (or cannon, for a cooler moniker) consists of four basic parts:

The user pumps air into the pressure chamber – the higher the pressure, the greater the distance of the launched potato. Once at the perfect pressure, all that remains is to flick that release valve and allow the air to travel down the barrel. The air, compressed into such a small space, expands along the barrel, pushing anything in its way out at a great speed.

Whilst the power generated depends on a few different factors, pneumatic launchers usually pack more of a punch than combustion designs. Some pneumatic canons have launched projectiles over 1,000 metres!

Aside from building weaponry, the misuse of compressed air can also help build flying replicas of beloved Star Wars characters (there is no practical reason for the existence of a flying Boba Fett, but it remains amazing nonetheless).

With the simple application of compressed air, combined with too much time on his hands and great engineering knowledge, a man named Rodger Cleye has bought the silver screen to life.

Using a spare fire extinguisher and an air system of PVC piping, Mr Cleye built his own boba capable of flight up to 25 feet in the air.

With a remote control trigger and launch pad, the pneumatic Boba Fett is perfect for positioning outside unsuspecting neighbours windows and terrifying them, as well as being an amazing example of great engineering and ingenuity.

Just spare a thought for poor Boba and where exactly that pole is going.